Conflict of interest: None

Materials and methods: A total of 145 newly diagnosed patients with OSA were enrolled in this prospective interventional study, who underwent CPAP therapy for 8 weeks. Baseline data including anthropometric variables, blood pressure, fasting glucose levels, insulin resistance and fasting lipid profile of all the study patients were collected before and after the intervention. We determined prevalence of metabolic syndrome in OSA and the effect of CPAP on the components of metabolic syndrome was determined.

Conclusion: In patients with syndrome Z, 8 weeks of CPAP therapy was associated with reduction in both systolic and diastolic blood pressure, insulin resistance and triglycerides and modest reversal of metabolic syndrome manifestations.

ABBREVIATIONS USED IN THIS ARTICLE

Metabolic syndrome, a cluster of cardiovascular risk factors was recognized as early as in the year 1920.1 It has been defined as a constellation of inter-related risk factors of metabolic origin including hypertension, insulin resistance, dyslipidemia and central obesity collectively called ‘‘Syndrome X’’.2 Obstructive sleep apnea is a condition characterized by the occurrence of repeated episodes of upper airway obstruction and airflow cessation. It is associated with fragmented sleep, disruptive snoring, nocturnal hypoxemia, and daytime symptoms most commonly excessive sleepiness.3 It is well established that OSA is associated with high cardiovascular morbidity and mortality.4 “Syndrome Z” is defined as the co-occurrence of OSA and metabolic syndrome. The prevalence of metabolic syndrome in patients with OSA varies from 70 to 85% and 37 to 41% among patients without OSA.1,5 Also the prevalence of OSA is as high as 66% in patients with metabolic syndrome than in subjects without metabolic syndrome 12%.6 Multiple pathways are involved in the interaction between OSA and metabolic syndrome including fragmented sleep nocturnal hypoxemia leading to neurohumoral changes, increased oxidative stress contributing to inflammation, a prominent phenomenon of this interaction.

Nasal CPAP is the treatment of choice in patients with moderate to severe OSA and it improves the quality of sleep, decreases excessive daytime sleepiness (EDS), and improves quality of life. Also decreases the risk of cardiovascular morbidity and mortality in these patients. However, effect of CPAP on metabolic syndrome is unclear. Most studies have shown a decrease in blood pressure with the use of CPAP7, with a few exceptions.8 Effect of CPAP on insulin resistance7,9 and the lipid profile7 are still controversial. This study was designed to look for the effect of CPAP on metabolic syndrome in patients with OSA.

This is a prospective interventional study conducted in the Department of Respiratory Medicine, Kempegowda Institute of Medical Sciences and Research Centre, Bengaluru, India, which is a tertiary care center and a referral hospital. We enrolled 145 newly diagnosed patients with OSA in the study, who were ready to use CPAP for eight weeks and willing to give consent. Patients having history of chronic kidney disease, chronic liver disease, cardiac diseases, thyroid problems, changes in current treatment for hypertension, diabetes mellitus and dyslipidemia were excluded from the study. Informed written consent was taken from all the study patients and ethical clearance was obtained from the Institutional Ethical Committee of the Institute.

All the study patients were evaluated for the presence of symptoms, like snoring, EDS, choking during sleep, nocturia, apneic events. The EDS was scored using Epworth Sleepiness Score. OSA was diagnosed by doing an overnight polysomnography. Apnea was defined as the absence of airflow for more than 10 seconds. Hypopnea was defined as a reduction of airflow for more than 10 seconds with oxygen desaturation of ≥4%. The apnea–hypopnea index (AHI), defined as the total number of apneas and hypopneas divided by the total numbers of hours of sleep, was calculated. Patients with AHI >5/hours were diagnosed to have OSA. Severity of OSA was decided by the following parameters AHI: Mild (5–15), moderate (15–30), and severe (>30).

Blood pressure was measured by periodically through calibrated mercury sphygmomanometer, according to the British Hypertension Society guidelines. Waking blood pressure was measured between 08:00 and 10:00 hours in the sitting position after at least 5-minutes rest and the mean of three measurements was recorded. Fasting blood glucose level was measured using the glucose oxidase method and plasma insulin by enzyme immunoassay using monoclonal antibody. Insulin resistance was calculated by homeostasis model assessment method. Triglyceride, high density lipoprotein (HDL) cholesterol levels were measured by immunocolourimetric assay.

Metabolic syndrome was defined according to the International Diabetes Federation (IDF) 2006 with Asian cut-off values for central obesity. According to IDF definition, for a person to be defined as having metabolic syndrome they must have central obesity (waist circumference more than 90 cm for men and more than 80 cm for women) plus any two of the following four factors: Triglycerides, >150 mg/Dl; HDL cholesterol, <40 mg/dL for men, <50 mg/dL for women; systolic BP, >130 mm Hg; diastolic BP >85 mm Hg; and fasting glucose >100 mg/dL.

The study patients were treated with CPAP set at a fixed pressure determined from the titration study. After 8 weeks of treatment with CPAP, anthropometric variables, blood pressure, fasting glucose levels, insulin resistance, and fasting lipid profile were measured again. No change in their current medications and life style was done.

Descriptive analysis of all the explanatory and outcome parameters was done using mean and standard deviation for quantitative variables, frequency and proportions for categorical variables. Chi-squared test was used to compare the presence of metabolic syndrome, BMI, other study variables including habits and comorbidities based on varying grades of OSA. Mann–Whitney U test was used to compare the mean values of sleep parameters based on the presence of metabolic syndrome. The treatment effects of CPAP on different variables were compared using Wilcoxon signed-rank test. Statistical significance was set at p <0.05. Data analysis was done using statistical package for the social sciences (SPSS) (Windows, version 22.0; IBM, Armonk, NY).

All the study patients were adequately titrated. The mean CPAP pressure was 12 cm H2O. The patients were evaluated after 8 weeks of CPAP therapy. Mean CPAP use in our patients was 4.5 hours/night and the compliance of the use of nasal CPAP was based on self-reporting. Among 106 patients with metabolic syndrome, 84 patients were compliant with CPAP therapy. There was statistically significant reduction in systolic (5.5 mm Hg, p = 0.001) and diastolic (3.5 mm Hg, p = 0.002) blood pressure, fasting insulin (4.1 μ/dL, p = 0.02), HOMA insulin resistance (1.4, p = 0.04) and triglycerides (17.3 mg/dL, p = 0.008) after CPAP therapy (Fig. 1). Even though there was an increase in HDL cholesterol and decrease in fasting glucose, it was not statistically significant (Table 2). The metabolic syndrome score decreased from 4.0 ± 0.9 before CPAP to 2.9 ± 0.76 after CPAP. There was modest reversal of metabolic syndrome manifestations in 22 of 84 patients (26.2%, p = 0.004) after CPAP therapy. When compared the metabolic components among compliant and non-compliant subjects, there was significant reduction in patients with high blood pressure (p = 0.02), dyslipidemia (p = 0.04) but there was no significant difference in number of patients with high blood sugars (p = 0.86) and waist circumference (p = 0.93) (Table 3). 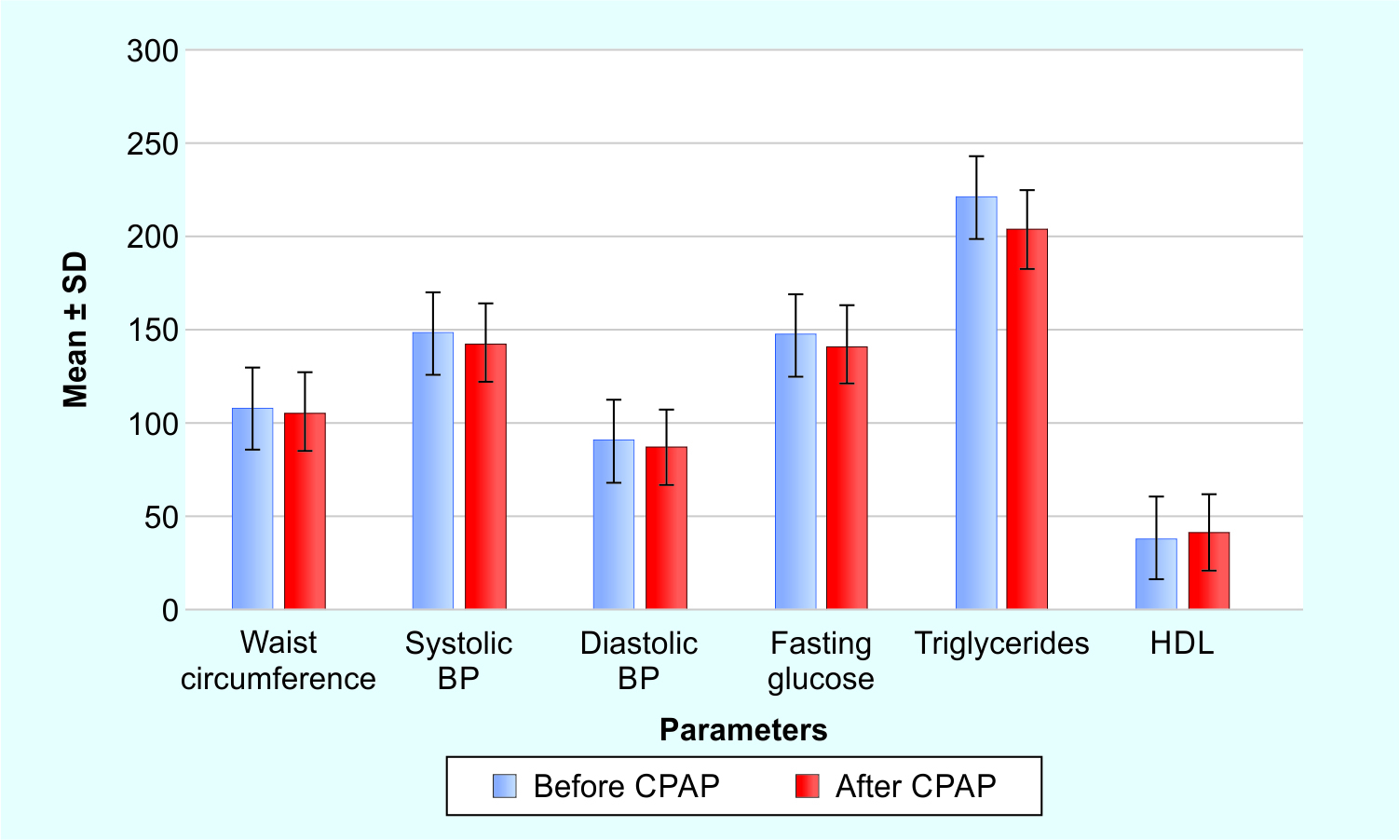 Fig. 1: Components of metabolic syndrome before and after CPAP treatment

Metabolic syndrome is a constellation of cardiovascular risk factors consisting of abdominal or central obesity, hypertension, dyslipidemia, and insulin resistance. Patients with OSA have been found to have abnormalities of each of the components of metabolic syndrome10 and their co-occurrence is called “Syndrome Z.” Obesity, particularly, visceral obesity and the accompanying insulin resistance are the main characteristics responsible for the pathophysiology of OSA and MS.

Main mechanisms by which OSA causes metabolic syndrome include intermittent hypoxia, oxidative stress, release of cytokines [tumor necrosis factor-alpha (TNF-α) and interleukin-6] and selective activation of systematic inflammation.13 It is possible that OSA either directly increases the risk factors or OSA and metabolic syndrome share a common risk factor other than obesity, such as sedentary lifestyle.11

Many studies have investigated the effect of CPAP therapy on metabolic syndrome and the results are contradictory.7,14 In an observational study,14 there was a reduction in the global cardiovascular risk in patients with severe OSA and metabolic syndrome after 8 weeks of treatment with CPAP in compliant patients. Reduction in cardiovascular risk were linked to reduction in blood pressure and in serum total cholesterol levels. Also, there was reductions in insulin resistance, TNF-α, and oxidative stress markers. However, a study7 demonstrated reduction in blood pressure only, without any change in glucose, insulin resistance, lipids, and the proportion of patients with metabolic syndrome.

Among the metabolic parameters, the prevalence of hypertension was the highest in patients with metabolic syndrome and it was more associated with severe OSA, as in our study too. We demonstrated a significant reduction in both systolic and diastolic blood pressures with CPAP which is in agreement with most of the previous studies.15 There was a significant improvement in triglycerides, HOMA insulin resistance and HDL and fasting glucose (even though not statistically significant) in our study with CPAP therapy, a finding similar to previous studies.12,16

The main culprit in these patients is nocturnal intermittent hypoxia, which through various neural and vascular mechanism leads to the development of hypertension. Also, insulin resistance itself may play an important role in the pathogenesis of hypertension and cardiovascular diseases.17 We did not observe a reduction in BMI. Obesity and visceral obesity are associated with an array of health risks. A 10% weight gain was associated with a 6-fold increase in the odds of developing sleep apnea, a 10% weight loss predicted a 26% decrease in the AHI.18 Visceral fat is a metabolically active tissue, which produces large amounts of pro-inflammatory or vasoactive substances,19 giving rise to metabolic dysregulation and atherogenesis. Obstructive sleep apnea may well modulate the expression of adipokines, cytokines, or hormones in adipose tissues, which may contribute systemically to the development of various features of metabolic syndrome and cardiovascular disease.19,20 The previous large prospective studies have shown that 5–6 mm Hg of reduction in blood pressure,21 as seen in our study, is associated with a 20–25% reduction in the risk of coronary heart disease and 35–40% reduction in the risk of stroke. Also, a 20% reduction in the risks of both coronary heart disease and stroke was noted with reduction of 40 mg/dL in LDL cholesterol level.22 Our results are in line with the above observations.

Reduction in insulin resistance and blood pressure were the main cause for modest reversal of manifestations in this study. Patients with more severe metabolic derangements at baseline had greater response to CPAP. Also in such a short period, other confounders are less likely to affect variables of metabolic syndrome. The present study has few limitations like, there was no control group, repeat sleep study was not done at the end of 8 weeks, compliance was based on self-reporting by the study patients and ambulatory blood pressure measurements were not performed.

We observed that 8 weeks of CPAP therapy in patients with Syndrome Z was associated with reduction in both systolic and diastolic blood pressure, insulin resistance and triglycerides. Also, CPAP therapy caused modest reversal of metabolic syndrome in significant number of patients. In patients with cardiovascular diseases, it may be important to look for Syndrome Z and treat it. It would also be interesting to know whether long-term treatment of the same decreases the risk of cardiovascular diseases.