Conflict of interest: None

Nocardia otitidiscaviarum is an infrequent cause of nocardial pneumonia and rarely affects non-immunocompromised individuals. Pneumonia may not resolve if the causative organism is not susceptible to the empirically given antimicrobial drug. Amoxicillin–clavulanic acid is a commonly used initial empiric antibiotic for suspected community-acquired bacterial pneumonia on outpatient basis. We report an unusual case of N. otitidiscaviarum as a possible etiologic agent of non-resolving pneumonia due to amoxicillin-clavulanic acid resistance in a previously healthy adult male.

ABBREVIATIONS USED IN THIS ARTICLE

Worldwide, Nocardia is found in the soil, water, and in decaying matter as saprophytes causing opportunistic infections in susceptible individuals. Nocardial infections are mostly due to inhalation of air contaminated with Nocardia. Nocardia otitidiscaviarum infections are less frequent compared to other species of Nocardia both in immunocompromised and non-immunocompromised individuals.1,2 Nocardial pneumonia may not resolve if specific treatment is not given or the causative agent is not susceptible to the empirically given antimicrobial drug. We report an unusual case of N. otitidiscaviarum as a possible etiologic agent of non-resolving pneumonia in an immunocompetent adult male.

A 49-year-old bus driver was admitted with low-grade and intermittent fever and cough of 6 weeks duration. Cough was productive of purulent sputum with intermittent minor hemoptysis. Before referral to us, the patient received a course of oral amoxicillin–clavulanic acid for the right lower lobe pneumonia followed by 1 month of anti-tuberculous (TB) chemotherapy at a local place without any relief. Sputum smears and cultures were negative for bacteria. Multiple sputum smears for acid-fast bacilli (AFB) were also negative. Personal and past medical history was not significant. On physical examination, he was thin and tall without significant lymphadenopathy. Clinical examination of respiratory and other systems was normal. Blood counts revealed a total leucocyte count of 13,200/cumm with a differential of 76% neutrophils and 16% lymphocytes. Mantoux test was negative. Sputum smears for bacteria, AFB, and fungi were negative. Chest radiograph (postero-anterior view) showed consolidation in the right lower lobe (Fig. 1). Blood biochemistry and immunoglobulin profile were normal. Enzyme-linked immunosorbent assay (ELISA) for human immunodeficiency virus (HIV) antibodies was negative. Flexible bronchoscopy showed purulent secretions within the right lower lobe. Gram stain of bronchial aspirate showed thin, Gram-positive, filamentous bacilli, and modified acid-fast stain demonstrated partially acid-fast, branching filamentous bacilli (Fig. 2). The bronchial aspirate incubated aerobically at 37 °C on nutrient agar grew Nocardia after 48 hours (Fig. 3). The dry chalky white colonies suspected of Nocardia were confirmed with microscopy and were speciated and identified as N. otitidiscaviarum by using a battery of biochemical tests, like urease production, citrate utilization, hydrolysis of casein, tyrosine, xanthine, and hypoxanthine and examined for growth at 45 °C, as already described.3 Further workup was not possible as molecular diagnostic techniques were not available in our hospital. The antimicrobial susceptibility testing was done with the disc diffusion method as per National Committee for Clinical Laboratory Standards (NCCLS).4 The isolate of N. otitidiscaviarum was susceptible to trimethoprim/sulfamethoxazole (TMP/SMX), linezolid, imipenem, and amikacin but resistant to amoxicillin–clavulanic acid and cefotaxime. The patient became asymptomatic after 1 month of treatment with oral TMP/SMX and a chest radiograph (postero-anterior view) showed significant resolution of the right lower lobe consolidation (Fig. 4). The patient was referred back to the local doctor at the patient’s request with an advice to continue further treatment to complete the planned course of 6 months. 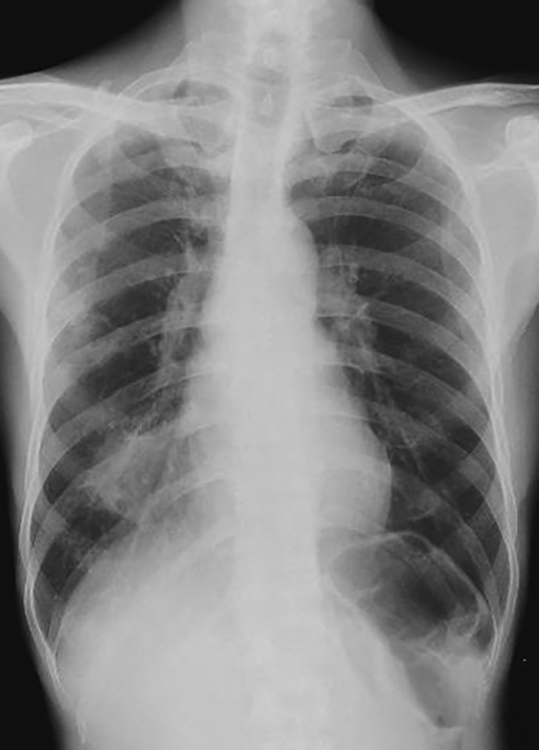 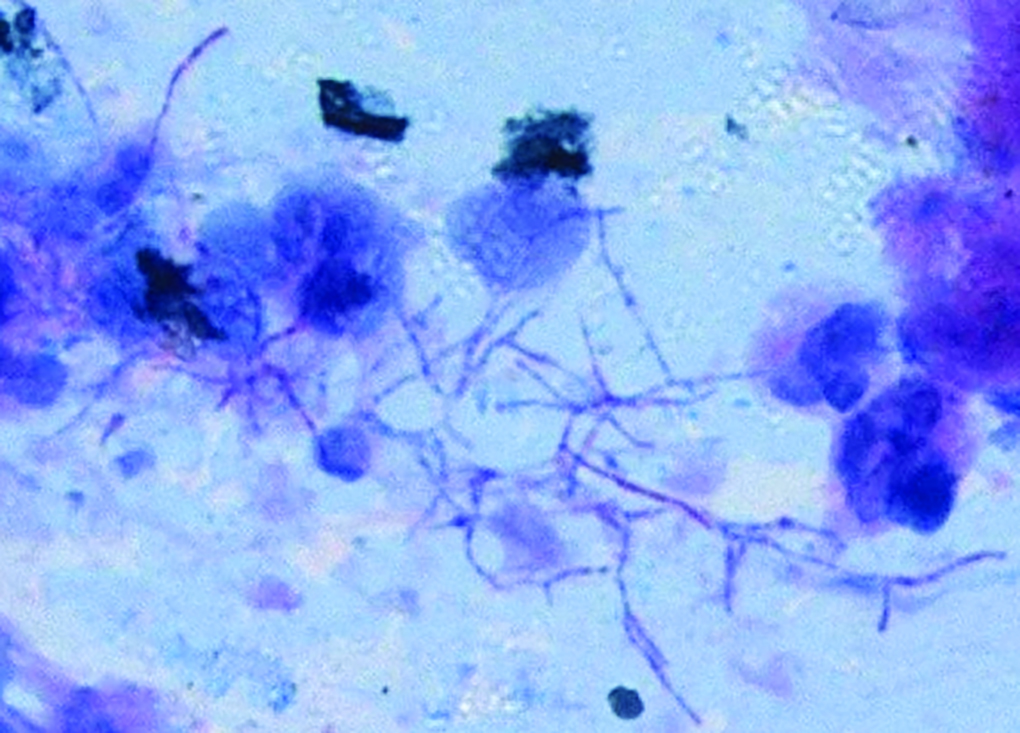 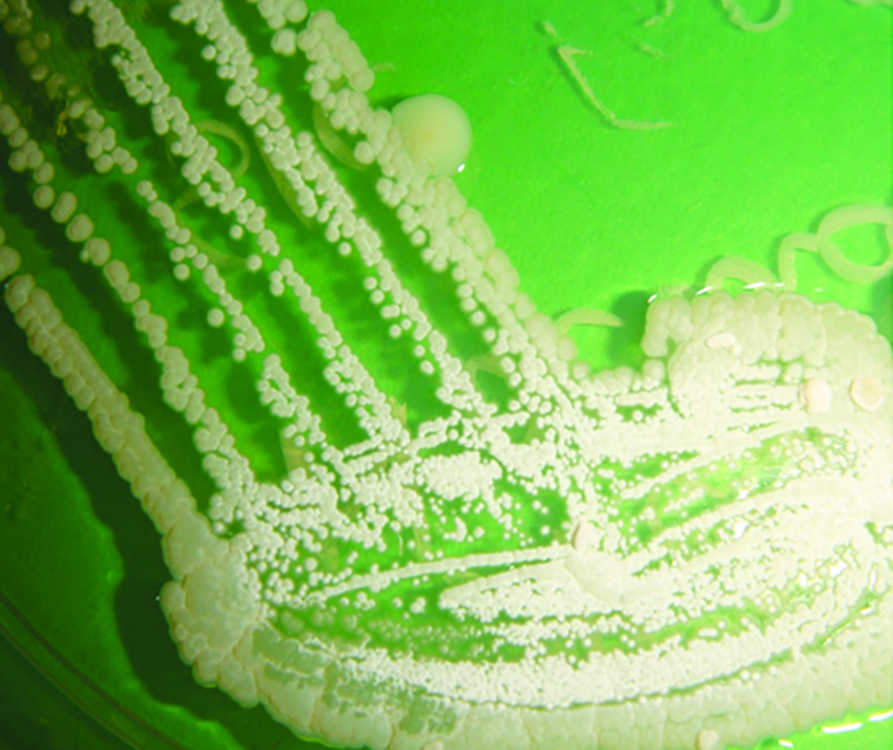 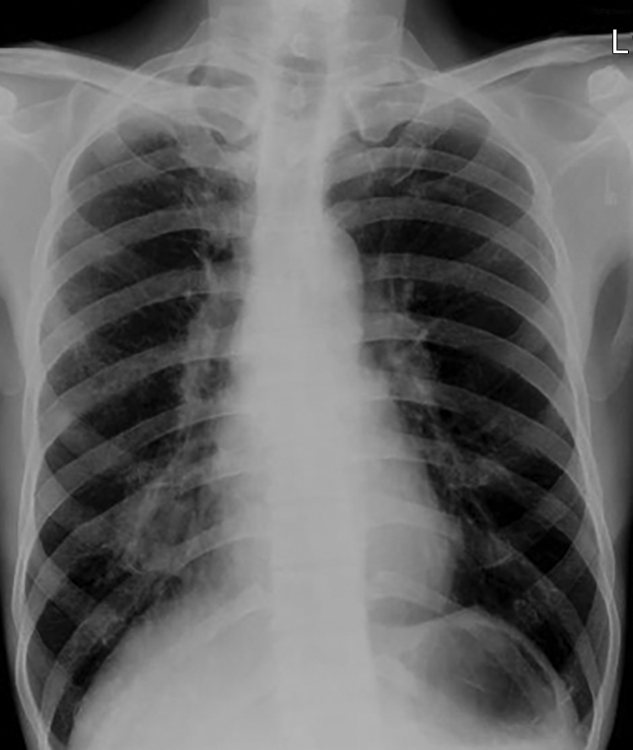 In 1974, the first human case of Nocardia caviae (Later named as N. otitidiscaviarum) was reported.5 Pneumonia is the most common manifestation of N. otitidiscaviarum followed by skin and soft tissue infections often in individuals with an immunocompromised state or with underlying disease like TB.6 Nocardial pneumonia does not have specific clinical or imaging features to differentiate from other infectious causes. The majority of cases of pulmonary nocardiosis have subacute onset and about 20% were initially misdiagnosed as pulmonary TB.7 In our case, the subacute onset of illness with negative sputum reports and failure of the antibiotic (amoxicillin–clavulanic acid) therapy prompted the treating doctor to suspect pulmonary TB and start empiric chemotherapy. The diagnostic yield of nocardiosis is not predictable even when multiple clinical specimens are submitted as only about one-third of them may show Nocardia.8 In our case, multiple specimens of sputum smears and cultures were negative and pneumonia was diagnosed with N. otitidiscaviarum as a possible etiological agent through a culture of bronchial aspirate followed by biochemical testing. Needle aspiration biopsy is useful to diagnose peripherally located N. otitidiscaviarum pneumonia initially suspected as malignancy.9 Before molecular techniques were available, time-consuming biochemical tests were used to identify the nocardial species. Based upon phenotypic and biochemical testing, a case series of pulmonary nocardiosis10 was published from our institute and 50% of cases were possibly due to N. otitidiscaviarum. Another Indian study identified N. otitidiscaviarum in 16.7% samples of nocardial isolates received from all over the country by using 16s rRNA and hsp65 gene sequences.11 Molecular techniques can accurately identify nocardial species without much delay and matrix-assisted desorption/ionization-time of flight mass spectrometry (MALDI-TOF MS) is emerging as a useful technique.12 The susceptibility testing of isolated Nocardia is important as some of the nocardial species are resistant to some antibiotics as their characteristic feature. Resistance to B-lactams including third-generation cephalosporin, like cefotaxime and amoxicillin–clavulanic acid is a feature of N. otitidiscaviarum.13 Pneumonia in our case did not resolve with amoxicillin–clavulanic acid as the N. otitidiscaviarum as a possible causative agent was not susceptible.

In conclusion, constant exposure to contaminated air by an apparently healthy adult may result in nocardial pneumonia. Drug resistance may be one of the causes of non-resolving pneumonia due to N. otitidiscaviarum.